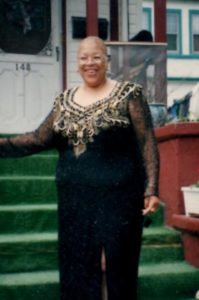 Celebration of Life for

She was born in Kings County Hospital in Brooklyn, New York to Louise and Samuel Anderson January 20, 1941. She attended John Adams High School in Queens. Later, she met and married Harry Smith and born from this were 6 Children: Robert, David, Samuel, Anthony, Tina and Tyrone Smith. David and Tyrone died after birth.

Constance attended Berean Baptist Church in Brooklyn, New York. She worked as a nurse at St. John’s Hospital and had several other jobs throughout the years.

She divorced in 1969 and later met and married Alonzo James, (AKA) Bang in 1974. They later moved to Staten Island, NY and became foster parents and adopted 3 children, Nicomus, Molesha and Lewis Owens James. They all attended First Central Baptist Church. They also became Eastern Stars and Masons.

In 2003 they retired and moved to Las Vegas. After all, to enjoy life!

She leaves five children to mourn: Robert and Tina Smith, Nicomus, Molesha and Lewis James. One sister, Louise Thomas, one brother, two cousins: Barbara Jenkins and Yvonne Forbes. 9 grandchildren, 22 great grandchildren and countless nieces, nephews and friends. Constance was loved by many and will be missed.

Sleep on Constance, we know your not dead but just gone to sleep. Your work here is done, you have a new home now. God has called you on to Glory, so take your rest in peace.