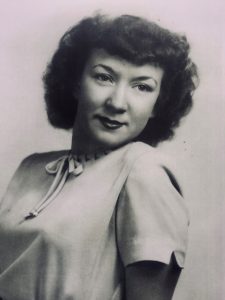 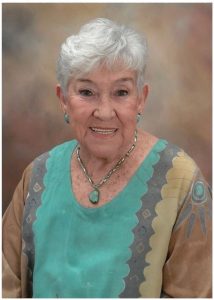 Alberta Louise Allard Hybarger died on October 2, 2021 at the age of 94 in Las Vegas, Nevada as a result of COVID complications. Alberta faced many physical and emotional hardships throughout her life. Nevertheless, Alberta lived life on her terms with an unsinkable attitude. As a daughter, sister, wife, mother, aunt, grandmother, and great-grandmother, Alberta loved her family and fiercely advocated for their welfare. She was a wonderful cook and seamstress, and enjoyed sharing her many talents with friends and family. Among her greatest gifts was her ability to make fast friends and to gather lifelong friends from many different walks of life, with variant faiths, philosophies, and beliefs. Her friends became like family to her. She was a member of the Church of Jesus Christ of Latter-Day Saints, and loved her ward friends dearly.

Alberta married Richard Hollen Hybarger at age 19. They later divorced, and she spent most of her life as a single parent to three children. She was frugal and did her best with her available resources. She often referred to herself as a “second-hand Rose.”  She could make gorgeous outfits from second-hand clothing and was considered a “snappy dresser.” She loved thrift stores, yard sales, and estate sales and was always looking for the amazing deal, which she called a “Gonga.” Because of her gift of frugality and her strong work ethic, she was able to provide for her children and herself as she aged. She worked for many years as a change booth cashier at the Dunes Hotel and was well known and admired by co-workers and guests of the hotel.

Alberta’s favorite holiday was Christmas, and her home decor in later life reflected Christmas every day of the year. Her Christmas decorations were known throughout her neighborhood and brought joy to many. This, in turn, brought great joy to her.

She learned to be a survivor and to be a warrior for her opinion, causes, and self-determination very early in life. Even up to her last days, she had gumption, strength, a sound mind, and a positive attitude. Her influence will continue to be felt in the lives of her family and friends.

Funeral services for Alberta Hybarger will be held at the Church of Jesus Christ of Latter-Day Saints at 1101 N. Pecos Road, Las Vegas, Nevada, on Friday, November 5, 2021. A viewing will be held from 9:00 a.m. to 10:30 a.m. with a memorial service to follow at 11:00 a.m. Interment will follow the service at Memory Gardens Cemetery in northwest Las Vegas at Lone Mountain and Tenaya.