Andrew Peter Zygmont, age 78 of Las Vegas, Nevada, passed away on January 23, 2022.  Our loving husband, father, and grandfather was surrounded by his family members when he passed.

Andy was born on May 4, 1943 to Andrew and Anne Zygmont in Niagara Falls, NY. After graduating from Trott Vocational High School in 1961, he joined the US Air Force and served from 1961 to 1965. After his honorable discharge from the USAF, Andy worked for DuPont in Niagara Falls before moving out to Las Vegas in 1967, kicking off his career as a dealer in various casinos both on and off the famous Las Vegas Strip.

In 1969, Andy met Cecelia Rundquist, and they wed in December 1972, going on to have four children, Angela, David, Paul, and Christina.

After retiring from dealing in 2004, Andy spent his time with friends and family, serving those he loved.  He especially enjoyed time with his grandchildren.

Andy was predeceased by both his parents, his beloved sister Maryanne, and his younger brother John.  He is survived by his older brother David, his wife Cecelia, his four children, and his nine grandchildren.

Services will be held at the LDS Chapel at 3400 W Charleston Blvd in Las Vegas on Thursday February 10, 2022, with viewing at 3pm and funeral service at 4pm.  Burial with Military Funeral Honors will be the following morning at 8am at the Southern Nevada Veterans Memorial Cemetery. 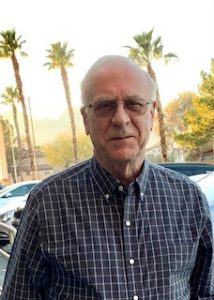