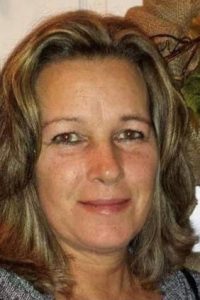 Our Angel has been called home.  Angela Marie Rasmussen McArdle, age 55 passed away December 5, 2021 in Pahrump, Nevada.  She was born August 16, 1966 in Pocatello, Idaho to Roger and Shirley Rasmussen.  She was the 15th child, and the baby of the family by just 4 minutes behind her twin sister Wendy.  Born in Idaho, she was just about a year old when our parents moved the family to Henderson, Nevada.  She spent her childhood in Henderson, Nevada.  As a young mother, and homemaker, she lived in Oregon, and then New Jersey.  She loved the East coast, and the beach was her favorite place to be.  She re-located back to Nevada in 2017, and made her home in Pahrump until the time of her death. She was an amazing woman, a loving mother, grandmother, sister, aunt, and friend.  She touched the lives of so many, and her passing has left a void in our lives that only she could fill.