One of our bright lights now shine in eternity. Audrey, a unique and unforgettable woman is now at rest. There’s so much to say about her courageous fighting spirit and the way she endeavored to reconcile the broken places of her life, but above it all she lived transparently. She trusted that God alone holds all the pieces of life that we cannot comprehend and that His relentless grace could carry her throughout her journey. I Cor. 12:9

Audrey Elaine Everett born in Portsmouth, VA on May 13, 1955, migrated to Brooklyn, NY during her early childhood years. Along with her mother Joyce (1940-1997) and younger sister Beverly, Audrey adapted to the native ways of the inner-city life. Meshing into the culture of the time and thrusting her adolescent self into motherhood, Audrey soon gave birth to two children Crystal and Damon (1971-1989). Nearly a decade later she went on to give birth to her youngest two children Jasmine and Tangi. Between those years, Audrey attended Job Corp, worked in administrative & customer service roles, and forged her independence.

Sometime after, around the early 80’s, Audrey lost her footing to the tumultuous world of substance abuse. Although her struggle stretched from her early 20s into her late 30s, rendering much of her life in shambles, she beat the addiction for good. Finding faith in God, working through a sobriety program, and earning her GED, Audrey courageously went back to face her life in the condition that it was in. While gathering the pieces of her world, Audrey re-established independence through gaining employment, adequate housing, and active participation in a local church. She also provided in-home long-term care for her ailing grandmother Elnora (1918-2000) and her grandmother’s partner Robert “Evans” (1928-2010), until they passed on.

With the years following, Audrey was able to embed herself into the lives of her adult children and grandchildren, making good use of her second chance. Her straightforward personality and authentic humor often made family events wildly memorable, but her true affectionate heart was also felt. Audrey frequently reflected on the abundance of love & supportiveness that she received from close relatives and dear friends who aided her on her journey. Most notable among them was Tangi, who devoted herself to providing hospice care for Audrey during the final two years of her grapple with COPD. On November 2, 2022, at University Medical Center in Las Vegas, NV Audrey transitioned into eternity after her condition was exacerbated by complications of COVID-19. No services will be held as her cremains have been respectfully & privately handled by her loving family. 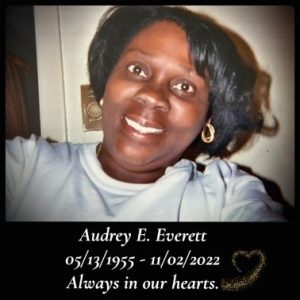