Barbara Mae Wilkinson, 90, passed away on March 16, 2022 in Henderson, NV from natural causes. She was the second daughter of Guy N. Henninger and Mae (Marshall) Henninger born in Kearney, Nebraska on May 2, 1931. She moved to Lincoln, NE at age 8 where her father held several high ranking military positions including Adjutant General for the Air National Guard and State Director of the Selective Service for the Vietnam War.  She married her high school sweetheart John Wilkinson in Lincoln after attending Missouri Christian College for two years where she excelled as a dancer and was voted the MCC College Widow Queen.  She supported her new husband as a boxer, football player, race car driver and entrepreneur in the automobile industry. She did a wonderful job of raising her three sons Joe, Mike and Pat all born in the 1950’s. In 1966 the family moved to Pacific Palisades, CA where she continued her care of the family and worked for McDonald Douglas in the west LA area.  After raising her family and her divorce from John she moved up the coast to beautiful and serene Los Osos, CA to a house her oldest son Joe built to sustain her indefinitely with rental units on the bottom floor.  She worked as a clerk in the San Louis Obispo court house for many years.  She was the favorite of many coworkers and judges.  She eased the tension of those queuing up to her window to settle their traffic fines with a huge smile.  If she could have reached through the window to hug them she would have.  She retired in 1992 to spend more time with her grandchildren and to travel throughout the USA and the world with her longtime companion Professor Charles Black. When Barbara began to experience health problems she moved to Henderson, Nevada around 2010 so that her son Pat and his family could “take care of her” while she maintained relative independence in her own house nearby for many years.  Due to multiple health issues a series of elder companions kept her safe and comfortable, but eventually her son Pat stepped up to the plate and became her full time caregiver until her passing.

Barbara’s sense of humor was sometimes corny but always fun.  She was patient, caring, tolerant, kind and a great listener.  She was literally known as a 2nd mom to many of her sons’ high school friends. She always rooted for the underdog, underprivileged and those down on their luck. She was the most positive person in the room. Throughout her life she brightened the spirits of friends and family comforting and encouraging them along the way.  She was almost praiseworthy to a fault, but she didn’t care.  It was her role to give everyone around her a boost and a vote of confidence.

A celebration of life for Barbara will be held on August 20th in Henderson, NV.  In lieu of flowers, hug a friend and call your mom and dad. 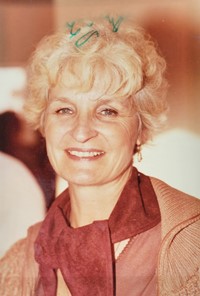