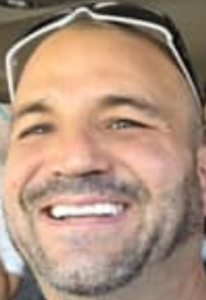 Our beloved Ben Ronald Gonzalez (AKA) ZIGGY, to his friends, entered eternal life on the morning of February 11, 2020. He was surrounded by his family and loved ones at the time of his passing. Ronald was born on November 26, 1970 to Ronnie and Nancy Serna Gonzalez and grew up in Pico Rivera, California. He brought joy and smiles to his family on that Thanksgiving Day in 1970.

Ronald is survived by his children, Jeremy Gonzalez, Kimberly Gonzalez, Brendon Rodgers, Damien Gonzalez, his longtime girlfriend of 12 years Stephanie Carney and stepdaughter Sierra Carney, his father Ronnie Gonzalez, sister Nanette Gonzalez, his nephew and niece Matthew Marquez and Brittany Gonzalez. He was preceded in death by his mother, Nancy, his maternal and paternal Grandparents, many aunts, uncles and cousins.

Ronald was the rock of his family. He was the ultimate dad. His love for his children is without end and everyone knows that nothing came before them. Ronald was a loving husband and pillar of strength to the love of his life for twelve years, Stephanie. He was an attentive and affectionate son and brother, and an adoring father figure to his niece and nephew.

Ron had a unique and infectious outlook on life. He was always so full of love and positivity. His attitude infected, not only those closest to him, but random strangers everywhere he went. Even after a terminal cancer diagnosis he had a positive outlook. He brought love and laughter into his chemo room, which made all the nurses, patients and doctors laugh or smile. His spirit was always glowing and continually infectious, inspirational and motivating to his family.

His aunts and uncles remember his love for Cookie Monster, a young baseball player and his insatiable taste for pan dulce. His late uncle Dan Terrazas enjoyed purchasing the pan dulce for him and hunted Ronald down and gave them to him just to see the smile on his face. That big beautiful smile that will never fade from our hearts and minds.

Ronald had an adventurous spirit that led him to many facets of work. He was a    longtime employee of the Venetian Hotel and Casino and most recently The Tropicana Hotel. He always wanted to be in control of his life by finding a business that would allow him to have the ability to spend as much time with his family as he could! So, he explored entrepreneurship, venturing in to specialty wines and Crypto Currency in his final years.

He loved life and never let adversity wipe the smile from his face. He will be greatly missed by his loving family and countless friends.

Funeral Services will be held at;