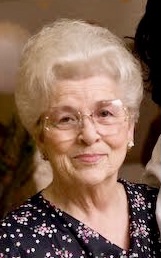 Betty Joyce Evans Roylance passed away on September 20, 2021 in Boulder City, Nevada. She was 87 years old. Betty was born on August 19, 1934 in Rockingham, North Carolina to Leroy and Ruby Sellers Evans. She had one sibling, a sister, Iva Mae, who preceded her in death. Betty grew up in Charleston, South Carolina and graduated from North Charleston High School in 1952. She attended one year of college at BYU in Provo, Utah. In 1953 she married Keith N. Roylance in the LDS Temple in Manti, Utah. Keith and Betty enjoyed 67 years of marriage prior to his death in July 2020 They moved to Nevada in 1964 and lived in both Henderson and Las Vegas. They are the parents of 4 children, Sally Roylance Gray of Boulder City, NV, Alicia Roylance Angell (Marion) of Las Vegas, NV, LaBaron Roylance (Veronica) of Hemet, CA and Ronda Roylance Seeley (Michael) of Palm Coast, FL. They have 12 grandchildren and 19 great-grandchildren, with a 20th great-grandchild due in January, 2022. Betty was a member of the LDS Church and served in many capacities in both the Young Women and Relief Society organizations. She and Keith served as workers in the Las Vegas LDS Temple for 25 years. She was also very active in genealogy work. Betty was employed occasionally at different jobs, mostly working in retail sales and as a PBX operator, but for the most part, she was a homemaker. She was a talented seamstress and quilter. She also enjoyed needlepoint, embroidery and latch hook. Betty loved to travel! For many years she owned her own motorhome and along with her close friend Mary Cassedy, they traveled back and forth across the country, visiting almost every state. Funeral services and viewing will be September 30, 2021 at La Paloma Funeral Home, 10 am. She will be buried next to her husband at Nevada State Veterans Cemetery in Boulder City, Nevada.