Curtis Kim Herrera passed away September 28, 2022, at the age of 62. He was born in Montrose, Colorado, to Raymond and Sarah Herrera, a left-handed, leap-year baby. Upon his 60th birthday, he liked to remark that he’d made it to “15” years old. The family moved to Las Vegas, Nevada, when Curtis was 7, where he lived the rest of his days. He was divorced and his cats were his babies.

Curtis found a career in retail at a very young age working for payment in candy at a local 7-Eleven which later turned into a cash paying job. Through the years he worked as a concrete laborer for his brother in law, Jim Hilly, alongside his brothers Duane and Andy. But he continued at 7-Eleven where he made lifelong friends. When visiting him at work on occasion, his nieces and nephews would get a Slurpee that he made even better by trimming the straw down-to-size for them.

Curtis was diagnosed with epilepsy in his early twenties and suffered the effects of the condition the rest of his life.

Known for his quirky wit and great love for his friends, family, fishing, Elvis and Anne Murray music, his passing leaves a hole in the hearts of those who loved him. 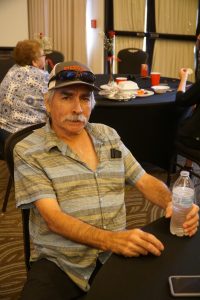