She was preceded in death by her parents, Winborne and Priscilla Jenkins; her husband, Capt. Charles Douglass Fletcher and her twin brothers, Winborne Terry and John Ward Jenkins. Born in Tuscaloosa, Alabama, Daisy grew up in England where Libby’s sent her father to manage their factory. She returned to the States for college earning a BA from Randolph-Macon Woman’s College and an MA from Smith College. In 1951, Daisy married Doug Fletcher, a submariner and graduate of the United States Naval Academy. As a  Navy wife, she moved twelve times in their 25 years of marriage, before Doug succumbed to cancer in 1977. A widow at 48, Daisy moved to Yorktown, VA to be closer to her mother, and remained there until last year, when for health reasons, she moved to Henderson to be closer to her daughters who all live in the west.

A lifelong volunteer, Daisy volunteered with Navy Relief and after settling in Yorktown, for the United Way, which led to her career as a counselor for Consumer Credit.

An avid quilter and prolific knitter, Daisy made many colorful quilts, sweaters and socks for family and friends. As a member of the Grace-ful Knitters at Grace Episcopal Church in Yorktown, she knit over 250 prayer shawls. She also loved gardening and flowers, but most of all Daisy loved her family. She looked forward to summers and the annual tradition of gathering  her three daughters, their husbands and her three grandsons for a week at the beach. She is survived by her daughters, Priscilla, Barbara and Catherine and grandsons, George, Greg and Douglass.

A Celebration of Life service will be held at Grace Episcopal Church in Yorktown on Tuesday, July 19, 2022, at 11:00 a.m. A reception will follow in the church parish hall. A private interment will be held at a date yet to be determined, where she will join her husband in Arlington National Cemetery. 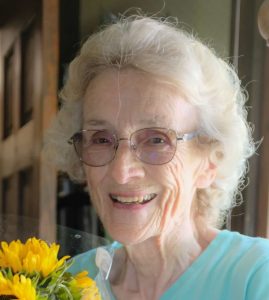