Darlene Weatherford went home to be with her Lord and Savior on July 8, 2022.  She was born May 12, 1936 to Cecil and Grace Marie (Roedell) Curry in Quinlan, Oklahoma.  She was a graduate of Quinlan High School in 1954 and attended Draughan’s Business College in Oklahoma City and Northwestern State College in Alva, Oklahoma majoring in Math.  She began her banking career at Four Corners Savings and Loan in Farmington, New Mexico.  She worked there for 25 years, during which time she was promoted to Vice President/Comptroller.  She continued working when she moved to Las Vegas, NV in 1991, at Nevada State Bank as a Loan Servicing Specialist.  She retired in 2004. Darlene loved sports, traveling, reading, puzzles and spending time with her family.

Funeral services for Darlene will be held in Las Vegas, NV at La Paloma Funeral Home (2551 S. Ft. Apache Rd.) on July 22 at 10 a.m.  Viewing for family and friends is set for 9 a.m until time of service. 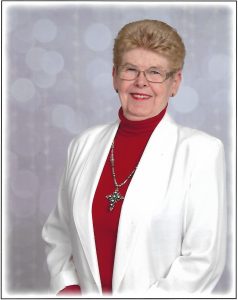