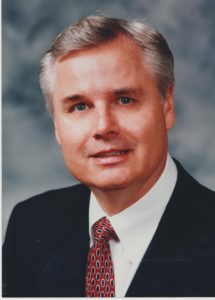 Dean was born in Southgate, California to Elva and Don Orcutt on October 14th, 1939, on his father’s birthday. He had two brothers Don, two years older and Dennis, five years younger.  One can imagine a house with three lively boys, but their mother always said Dean was the one to make them laugh.

When Dean was thirteen, his father decided to move his family to the small town of Ouray, Colorado where Dean first met the love of his life, Ann.  As a teen Dean was very industrious.  His father bought a string of horses and it was not long before Dean was managing a trail-riding business.  As soon as he obtained his driver’s license, he drove jeeps in the beautiful San Juan Mountains around Ouray for a local touring company.  By age seventeen, he was managing the still famous Ouray Hot Springs Pool.

In 1957, Dean left Ouray to attend university, working summers in Southern California for Bechtel Corporation, a global engineering and construction company, where his Aunt Vi was an executive secretary.  He started at the bottom as a gopher, driver and then surveyor.  In 1961, he married Ann and then graduated from Colorado State University in 1962, with a degree in Industrial Construction Management.

After graduation, Dean was hired full time by Bechtel, and he and Ann embarked on a career filled with travel and new adventures.  In 1963, a daughter Carolyn Ann was born, and in 1965, a son, Jason Dean.  Dean was a devoted father to both of them, always taking an active interest in their hobbies, teaching them everything he knew, challenging them to improve, and always letting them know how much they were loved.

Dean’s industriousness and innate ability to simplify the complex, as well as his genuine regard for people of all walks of life, carried him up the corporate ladder at a rapid pace.  Travel was always in the cards and there were many worldwide assignments with challenging projects including: James Bay- Hydroelectric Project; Saudi Arabia King- Fahaad Airport; Turkey- Turkish Motorway and London; various Civil Projects.  Many business trips routinely took him to some of the farthest reaches of the world.

By 1994, at the age of 55, Dean was named President of Bechtel Civil and Partner in the company.  Shortly thereafter, Dean was diagnosed with Parkinson’s disease and made the very wise decision to retire and enjoy the remaining years of his life to the fullest.  He served as a consultant for Bechtel for a couple of years following his retirement and then served as a consultant on the board of American Bridge until 2012.

Dean and Ann moved to Lake Tahoe, Nevada in 1997.  Dean quickly became very well known as a regular at Heavenly Ski resort, with “Ellie’s” being his favorite run.   In 1998, they found their permanent lakefront home in Zephyr Cove and spent the next year remodeling it into a beautiful family retreat where friends and family have spent countless days together enjoying the lake, each other and everything the area has to offer.

For several years Dean was able to enjoy all the activities he loved including skiing, hiking, boating and golf.  He even bought a Harley Davidson to tool around in when the mood struck.  He never complained about his condition and always pushed the limits- at times a bit too much for Ann’s liking!

In 2017, Dean and Ann moved to Cascades Senior Living in Spanish Springs, NV, as more care was required for Dean’s condition.  Here Dean, with Ann always faithfully by his side, enjoyed the company of family and friends especially gatherings for Holiday BBQs, Thanksgiving Dinners, Christmas Eves and visits from his first great-grandchild.

Dean will be deeply missed and the void left behind, within his family and community will never be replaced, but he will always remain in our hearts with eternal love, incredible memories and deepest respect.

In lieu of flowers please donate to: