Don was born in Huntingdon, PA to G. Donald and Sarah C. Fisher and graduated from Huntingdon High School in 1944, The Bullis School in 1945 and the US Naval Academy in 1949. At the Academy he was a plebe Football Manager and ran Intermural Track. Upon Graduation in the 13th Company he entered the Supply Corps.

On June 11, 1949 he married Christel MacDonald. He graduated from the US Navy Supply Corp School in 1950 and was Supply Officer, USS Henry W. Tucker (DDR875) with 9 months in Korea, Supply Officer, Fasron 52, Patuxent River, MD and an Assistant Supply Officer, USS Intrepid (CVA11). He then resigned as a Lieutenant in 1955 and was employed by Eastman Kodak for 31 years in Industrial Engineering (1 Year) and Purchasing/Materials Management (30 years). He retired in 1986 as a Unit Director.

He and Chris moved to Ponte Vedra Beach, Florida and traveled the United States, Canada, The Caribbean, Panama Canal, Alaska, Europe, Greek Isles, Turkey, Scandinavia and Hawaii. Don held Life Membership in the United States Naval Academy Alumni Association (USNAAA) and Huntingdon BPO Elks 976.  In Rochester he held positions in Wesley United Methodist Church, the local USNAAA Chapter and the Boy Scout Troop Committee. In Ponte Vedra he was a member of the Cranes Lake Board, the Jacksonville USNAAA Chapter and a Charter Volunteer (1998 – 2010) at the World Golf Hall of Fame as a Docent and Tour Guide.  In 2001 until 2011 he did 141 role plays as golf legend Walter Hagan to visitors and outside groups locally and in New York, Ohio and Pennsylvania. He also volunteered at Baptist Beaches Hospital and Palms Presbyterian Church for five years starting in 2008. He and Chris joined Palms Presbyterian in 1987. They organized 5 USNA Company reunions in the Ponte Vedra and Annapolis from 2002 to 2007.

After Chris’s passing, Don moved to Las Ventanas in 2014 to be close to his son Bill and his wife Sylvia. He made many new friends and enjoyed an active lifestyle participating on the Finance Committee, Bible Study, OLI Classes, Men’s Dinner Club and keeping scores for the annual Football Contest. He was regular figure at his corner table each night for dinner in the La Paloma. 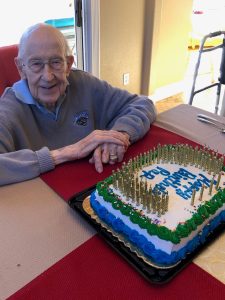