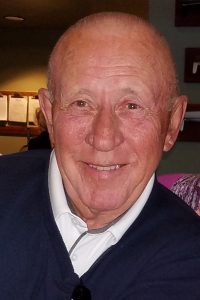 Ed Wacker was on the 13th hole @ Paiute Golf Course on April 28th, 2020 when after 50 years of golfing he finally got a hole in one, unfortunately the shock of it caused him to drop dead. How we wish that were true, Ed’s “Good Walk” was spoiled by cancer.  He did however die at home surrounded by his loving children.

Ed was born in Woonsocket Rhode Island on March 21st, 1941 to Joseph Edmund Wacker (deceased 1994) and Margaret Idella Lambert (deceased 1978). Ed was a lifelong sports enthusiast; his chosen sport was baseball where he excelled and was a high school star. After high school Ed played minor league baseball for the Red Sox franchise but his dream of playing professional baseball was cut short when he threw his arm out. Ed joined the Air Force and was stationed in Wichita, Kansas where he met and married Gloria Jean Murphy in Feb. 1963, they had 3 children. She proceeded him in death 2018.  Ed spent much of his career in the television advertising and automobile industry.

Ed was a loving father and grandfather, avid golfer and friend of Bill’s for over 38 years. The family is grateful for the many prayers and support given during Ed’s illness. They would also like to thank his physician Dr. John Moorhead, his staff and Southwest Medical Hospice for their care.

To honor our Dad please spend time with your family and go hit a golf ball or raise a cup of joe. He will be smiling down from Heaven at your gesture. At Ed’s request no services are planned and he will be cremated per his wishes.