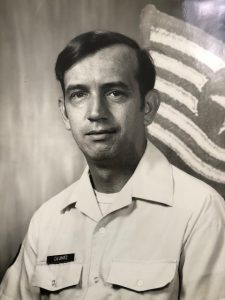 Tech Sgt. Edward H. Gluntz, age 86, passed away peacefully, in his sleep, on Wednesday, March 11, 2020, at his home in Las Vegas, NV.   His family has lost their hero and the greatest man they have ever known.

Ed was born in Milwaukee, WI, in 1933, and grew up in the midst of the Great Depression.  He left school after the 8th grade to go to work to help support his family.  When he obtained legal age, he joined the U.S. Army and served with the 16th Combat Engineer Batallion during the Korean War.  After the war, he was honorably discharged from the U.S Army and re-enlisted in the U.S. Air Force, serving a total of 22 years in the two branches of service.   Ed also worked for 20 years at the U.S. Post Office in Milwaukee, WI.

Services with full military honors will be held at the Southern Nevada Veterans Memorial Cemetery in Boulder City, NV, at 2 p.m. Monday, June 1, 2020, followed by a Celebration of Life family picnic in his honor at South Park, 921 S. Main St., Waupaca, WI, at 1 p.m. Saturday, June 6, 2020.  In lieu of flowers, donations can be made to the Southern Nevada Honors Flight or to the Disabled American Veterans Program.

Ed was able to make an Honors Flight to Washington, DC, with the Southern Nevada Honors Flight program in May, 2019.  It meant so much to him to be able to go and to be honored in such a way.

Ed Gluntz left a legacy of livelong lessons in responsibility, loyalty. service to country and love of family.  His family is comforted by the fact that he is now reunited with his “buddy” Lois.  We will miss him dearly, but cherish the memories we had with him and the memories we will create going forward, due to having known him.