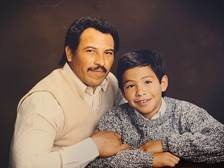 He lived in Las Vegas, NV from 1984 – 2001, he then returned to El Paso TX in 2001 to care for his beloved mother until her passing in November of 2015. One of his greatest achievements was becoming a United States citizen. He was very proud of himself and so was his family. He loved the Beatles,Los Apson, the Dallas Cowboys, and was very good at dancing to oldies, twists and 60’s rock. He also enjoyed making people laugh with his funny dances and jokes.

He always saw the good and positive in everything no matter how bad any situation was. The last 3-4 months of his life was spent with his children and grandchildren here in Las Vegas.
Milo was loved by all who knew him and will be deeply missed by all his family and friends. We will carry him in our hearts for all eternity May God protect him and keep him safe in his arms.