Elsie Cathaleen Sims left this earth for Heaven on November 5,2022. Elsie was born October 12, 1921 to A.W. Scott & Mattie Scott in Fullerton, Nebraska. She was preceded in death by her husband Clarence, her parents, her 7 sisters, 2 brothers and, sadly, her eldest son Gary and grandson Nicholas and just this year.

Elsie is survived by her second son Greg and his wife Susan of Marsing, ID & her youngest son Kevin and his wife Suzey of Henderson, NV. Also by her 9 grandchildren, Kari, Erika, Darin, Renee, Ryan, Scott, Matthew and Katie and 10 great grandchildren, plus many beloved nieces and nephews.

Elsie married her beloved Clarence and lived a while in DeKalb, Il. Before moving to Niagra Falls where Elsie gave birth to their first child, Gary. When Clarence left to serve in WWII Elsie and Gary went back to Nebraska where Elsie worked in the ammunition plant in Grand Island. When Clarence came home, they moved to Southern California where her sisters lived with their families. Elsie’s 2nd child, Greg and then later Kevin completed the family.

Being a woman of many talents, Elsie eventually became a beautician and owned a beauty salon with her sisters Eunice and Vi called the Three Sisters Coiffures in California, they were later joined by her sister Lorraine. She also helped manage the Pioneer Motel in Buena Park, CA which she and Clarence owned with her two sisters and their husbands for 8 years.

In 1975, Clarence, Elsie and Kevin moved to Yorba Linda where Greg & Gary lived with their families. She enjoyed being near all 3 of her sons and the grandchildren. Elsie drove a school bus for 13 years for the Anaheim School District, retiring in 1986. After living in California for 49 years, she and Clarence decided to move to Henderson, NV. in 1994. She enjoyed going to the Senior Centers in Henderson & made many friends at her church.

To say that Elsie was a beloved wife, mother and grandmother would be an understatement, she was adored by all who knew her. Elsie loved to play cards and had a competitive spirit. She collected friends everywhere she went and kept them for life. Blessed with a keen sense of humor she kept us all laughing.

Most important to her was her faith, Elsie was a strong believer in Jesus Christ and loved to listen to the old hymns. We are thankful to know she is safe in Heaven and that we will see her again one day. 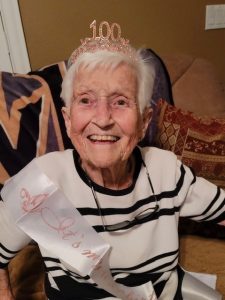