Francis Marion Bodell, 86, of Las Vegas, passed peacefully at home in Las Vegas on September 10, 2021. “Marion” was born on June 23, 1935 in Panaca, Nevada to James Chester Bodell and Laurine Lee.

Marion graduated from Lincoln County High School. He met his future wife Irene at the movie theater in Caliente, Nevada. They were married on August 17, 1956 in Panaca, Nevada. After Marion served two years in the US Army; they moved to Las Vegas, where they lived for 61 years. Marion was a hard worker who always provided for his family. He worked for many years with Southwest Gas and later D & C Builders. Marion enjoyed camping, fishing and car racing very much. He raced at Craig Road Speedway in the 70’s and still had his 1st place trophy he had won. A huge NASCAR fan, he never missed a race. He was also a loyal UNLV Rebel basketball fan, and more recently, a Vegas Golden Knights fan. Marion had a great heart, with many friends who enjoyed his company, sense of humor, and wonderful life stories. He will be missed so very much & we were blessed to have him here with us for these 86 years.

As per his wishes, no services be held. Marion will be interred at the Southern Nevada Veterans Memorial Cemetery in Boulder City, Nevada at a later date along with his loving wife Irene. 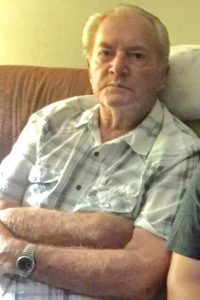