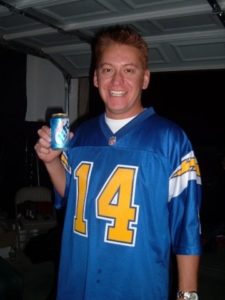 George (Joe) Joseph Denstaedt II was born September 25, 1973.  Originally from Azusa, Californian. He moved to Las Vegas, NV in 1997 where he has lived for the past 22 years.  Joe passed away far from home in New Orleans, LA on November 2, 2019

Joe was always a very attentive son to his father and mother Floyd Paul Denstaedt and Maria Rosa Natividad.  Joe would always talk about his dad and the times they spent together working on cars and how much information he learned from his dad just being around him.  He would still look up to the sky and ask for his dad’s advice on questions and would somehow come up with a solution.  He lost his Father Floyd on April 2, 2003.

Joe’s mother Maria was able to spend her last few months living with Joe and his family.  He would always encourage her to get out of the house and live her life to the fullest by going camping, to her grandson’s baseball games and the occasional pedicure.  Joe lost his mother Maria on December 17, 2015.

Joe married Kristina (Haynes) Denstaedt on May 10, 2003.  Together they had several wonderful years and created an amazing blended family of boys; Joey, Jared & Dawson along with adding another to the crew soon after, Connor.

Joe served in the Army from August of 1991 to August of 1996.  During his enlistment he achieved many awards but was most proud of his Ranger Tab and the time he spent in the Army with his MANCHU brothers.

He was a patriotic man, loved America, loved the flag and yes even loved Trump.  Most of all Joe loved his family and friends, although he would use the word “Friend” lightly because no-one was really just Joe’s friend, they were always family.

His smile would light up a room when he walked in, he had a way with people.  Joe was able to make each and every person in the room smile, everybody felt completely comfortable around him and everyone always became his best friend.  And please never ask Joe for a hand shake, it was always a hug and not a normal hug you would get a “Joe Hug.”

Joe was always so willing to help out anyone with anything from putting up Christmas lights to remodeling a house or nursery.  And if he saw a neighbor on the street working on something he would go over and offer his assistance.  His skills and craftsmanship will be missed all around.

He was the kind of man that didn’t want much and was just happy in the backyard or the garage with a beer in hand, a game on the TV and some close friends (family) around him.  He always had a game on whether it be the Chargers, Knights, Cubs or Angels or really anything else sports related, the game was always on at Joe’s house.  He also really enjoyed camping and dreamed one day to travel the United States with his wife Kristina so they could visit all the wonders of his beloved country. If not camping, watching sports or helping someone out you could find Joe in his boat or on his dirt bike.  He was an outdoors man for sure and only went inside when it was time for bed.

Joe may no longer be here with us but will never be forgotten and will continue to live on in the lives of his wife Kristina and four wonderful son’s Joey, Jared, Dawson and Connor.