Irene spent most of her youth in Caliente, Nevada and met her future husband Marion while working at the local theater. They married on August 17, 1956 in Panaca, Nevada. Irene and Marion were married for 65 years and were reunited when he passed on September 10, 2021. After living in Panaca and Oklahoma for a few years, she settled in Las Vegas, where she was a resident for 61 years. While raising her children, she also worked full time at WonderWorld department store for many years before going to work at the Review Journal where she was the cafeteria manager until she retired. Irene loved animals, especially dogs and polar bears. She was a devoted wife, mother, and grandmother who loved to decorate for Christmas every year. She also enjoyed Country music and going to Homecoming each May in Caliente. We will miss her quiet, yet unwavering love.

No services will be held. Irene will be interred at the Southern Nevada Veterans Memorial Cemetery in Boulder City, Nevada at a later date along with her devoted husband Marion. 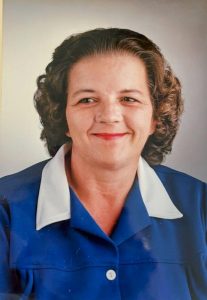