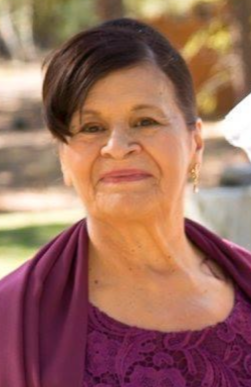 “Irene Lang, née Leyvas was born to Ramond “Rudy” Leyvas and Ruth Moreno on April 18, 1941 in Los Angeles, California. She spent much of her early years living in the Los Angeles area with various family members, including her baby brother Bobby and several half-siblings. She graduated from Belmont High School in 1959 and attended Hollywood College of Beauty and Los Angeles City College. She worked for a brief time as a cosmetologist, and a few year later, as a clerk/bookkeeper at Blue Cross Blue Shield. In 1971, she met Lawrence “Larry” Lang at a nightclub in Marina del Rey, California. After dating for almost a year, the pair married on Jan. 22, 1972 in Virgil, New York, where Larry was born and raised. After Larry accepted a job in Alliance, Ohio, the couple moved to the area, bought a house, and welcomed their first child, Kelley, in 1973. Sons Brian and Jeffrey followed in 1976 and 1977. The family moved to Reno, Nevada at the end of 1979, after Larry started a new job with Lear Fan Corp. The family moved into their new home in Lemmon Valley in the spring of 1980. A year later, daughter Susan was born, followed by son Aaron in 1984. During those years, Irene stayed home to raise the children with love and discipline while Larry worked hard to keep their family well provided. Although Irene’s main occupation was as a devoted mother and wife, she found time to indulge her interests in gardening, sewing, reading and Civil War history, as well as attending her children’s school plays and concerts and sports events. After her children grew up and started families of their own, Irene relished babysitting her 10 grandchildren and enjoyed nothing more than having the family over for birthdays, holidays and other occasions. Irene turned 80 years old on April 18, 2021. After a long year of isolation due to COVID-19 safety precautions, the family looked forward to celebrating her milestone birthday on Mother’s Day. Sadly, Irene suffered a massive stroke on May 3, 2021. After a valiant two-month fight, Irene passed on July 5, 2021. Her spirit is free and she is no longer in pain. Her family will always love and miss her, but are comforted by their faith that she is at peace and reunited with her long-departed family members.”