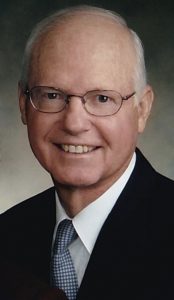 Janson Frank Stewart passed away peacefully on November 5, 2019 in Las Vegas, Nevada at the age of 84.

From 1956 to 1958, Jan served a two year mission for the Church of Jesus Christ of Latter-day Saints in Queensland, Australia where he assisted in establishing a branch of the church in Rockhampton.  Upon his return, he attended Brigham Young University where he obtained his undergraduate degree in 1961.  He then went on to attend law school at the University of Arizona at Tucson and graduated in 1966.

In 1963, he met Sandra Lee Clawson from Seattle Washington and they were married in the Idaho Falls Temple in 1964.  They had 6 children.

After law school, Jan and Sandy moved to Las Vegas.  After a few years in private practice he worked for the Las Vegas District Attorney’s Office for 11 years.  One significant achievement he made in his career was when he worked for 3 to 4 years at the Clark County Risk Management department where he started a self-funded insurance program that saved the county millions of dollars over the years.  Jan then joined the Clark County District Attorney’s Office where he served as Chief Deputy of the Civil Division until his retirement in 2003.

In the early 80s, Jan was elected State Assemblyman for the 14th district in Las Vegas.  He was re-elected for two more terms and served as Chairperson of the Judiciary Committee.

Jan was active in and dedicated to his church.  He served in a stake presidency and as a bishop.  In 2001 Jan and Sandy served a one year mission in Montgomery, Alabama – in the same area where his grandfather (William Thomas Stewart Jr.) had served 50 years prior.  Upon returning from the mission, he served at the Las Vegas Temple as Director of the Family History Center.

Jan was an adventurer and loved to travel with his wife and family.  He enjoyed boating, waterskiing and riding horses.  He especially enjoyed spending time with his family at the Stewart Family Cabin on Cedar Mountain and working in his yard.

A viewing is scheduled for Friday November 8, 2019 from 6:30pm to 8:00pm at the Church of Jesus Christ of Latter-day Saints chapel, 375 N Hollywood Blvd, Las Vegas, NV 89110.  A funeral service will be held at the same location on Saturday November 9, 2019 at 9:00am.  All are welcome to attend and celebrate Jan’s life.  Jan will be buried at the Parowan, Utah Cemetery.