A musician, Jeff will be remembered by a wide array of family and friends, as well as the dedicated staff and fellow residents at Marquis Centennial Hills.

Although a long-time employee of Cox Communications in both California and Nevada, his heart, passion, and undeniable talent was music. As the bass player for the funk band, Khronic Break, Jeff poured his considerable soul into their well-developed sound. One of his greatest joys was to express himself through his chosen instrument.

If WUG had another title, it was Champion of the Underdog. Jeff’s compassion and empathy were apparent from an early age. While he revered all creatures, he was a special friend to all reptiles, large and small.

Jeff is survived by his parents, George Brantley and Transeda Kelley, as well as his Bonus Mom, Peg Brantley, and sister, Darla Pearsall.

Celebrations of Jeffery’s life will be held in Las Vegas and Denver. 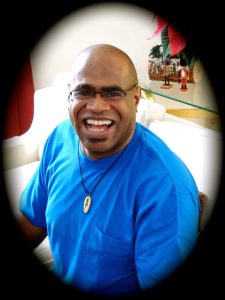