John Graham Verity Waite was born November 3, 1943, in Khartoum, Sudan to Charles Verity Waite and Evelyn Boyt Chessum Waite, from Bradford, Yorkshire, England, as they were posted by the British Colonial Service in Africa for many years. At the age of 8 he was sent to St. Lawrence College in Ramsgate, England as a boarding pupil. After graduating from St. Lawrence, he attended Kings College London as a medical student taking one semester in Ghana. After getting his medical degree in 1967, he tried out pediatrics, then focused on psychiatry. He met his first wife Marjorie Anne Burgess while she was also studying in London. They traveled to Providence, RI in August 1969 to marry. Son Benjamin Alexander Waite was born in April 1973, and after leaving London for St Louis, Missouri (USA) in 1975, John and Marjorie had second son Thomas Charles Waite in January 1976.  John worked at the Missouri Institute of Psychiatry in St. Louis, then his career took him into work at both the US Veterans Administration and private practice, in St. Louis and later in Las Vegas. John and Marjorie divorced in 1979. He subsequently married and divorced Agnes, then married holocaust survivor Edith Gano in St. Louis, and was widowed when she died in the early 1990’s after the two of them had relocated to Las Vegas. John had a wicked sense of humor and was an avid fan of film. While in Las Vegas he befriended the filmmakers, Ray Steckler and Ted Mikels, and had a second ‘career’ as a credited cast member in Ray’s final film ‘One More Time’. He loved his Las Vegas family, died peacefully at his home on March 18, 2022, and is survived by his 2 sons and 5 Waite grandchildren (Sophia, Emma, Lucas, Breanna, and Desmond). 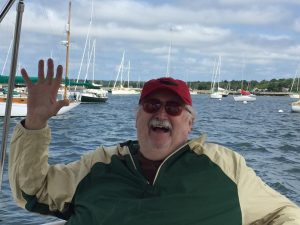 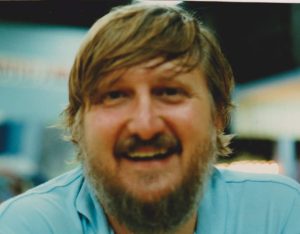