John was a performer his whole life: a family gospel group at age 5, Summer Stock, The Music Man with Shirley Jones, Once Upon a Mattress with Carol Burnett, Oliver’s Mr. Bumble, Man of LaMancha’s Sancho Panza with Richard Kiley, various venues around the world and barbershop singing.

He served honorably and with distinction in the Marines, graduated from Montana State University with a combine vocal and instrumental degree, and taught public school for 5 years.

After years of diligent search for Christ’s church on earth, John received a powerful testimony and joined the Church of Jesus Christ Of Latter-day Saints March 1991. In July 1991 he met the love of his life, Phyllis Jensen Soto. They were married on October 5, 1991 in Henderson, Nevada. Marriage was solemnized on June 6, 1992 in the Las Vegas Nevada LDS Temple. John gladly adopted Phyllis’ daughter, Rebecca, later that summer.

John and Phyllis had dreams of moving to College Station, Texas to start a new chapter in their lives when John was called home to rest from his labors in the arms of God. 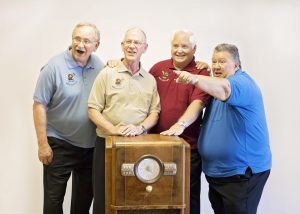