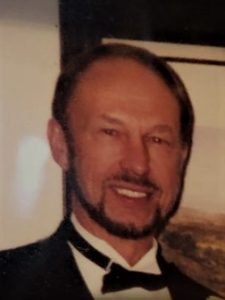 In his youth John enjoyed tap dancing and playing alto saxophone in his high school dance band. Also during high school, John started working at Linn County Abstract Company where he excelled in the business and eventually went on to own his own abstract and title insurance business in Fremont, Nebraska.

John enjoyed an active lifestyle and had a great enthusiasm for sports and games of all kinds. John particularly loved playing tennis and participating on bowling leagues.  In his later years, John relished card games with friends and completing difficult jigsaw puzzles. Throughout his life, John was always sought after by grandchildren, nieces, and nephews for his fun-loving enthusiasm, witty stories and willingness to play any game with them at any time.

In 1989, Carolyn and John left Nebraska to start a new chapter in their lives in Las Vegas, Nevada.  John especially loved the warmer weather and entertaining friends and family as he eagerly led sightseeing tours of their new town. Even after relocating in Las Vegas, Nevada, John continued his career in the title business and ultimately retired from First American Title Insurance Company in Las Vegas, Nevada.

John led a full life – a loving and happy marriage of nearly 50 years, a wonderful family who loved him dearly, countless friendships, and a successful career. For those of us left behind, we will miss John tremendously.  John held a special place in the hearts of all who knew him.  Rest in peace, John.

A Celebration of Life will be held at a later date.