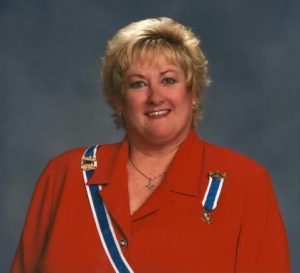 Kimberly Ann Whitfield, 60, passed away on July 16, 2021, in Las Vegas, Nevada.  She was born December 12, 1960 to Charles Paterson and JoAnn Smith Paterson in Cleveland, Ohio. Her and her family also lived in Alexandria, Virginia and Wakefield, Massachusetts. She worked as a Supervising Auditor with Nevada Department of Agriculture before retiring.

Kimberly is survived by her husband Douglas Whitfield of 18 years. She is also survived by her special aunt in-law Mary Lee Dike, special cousin in-law Jean Oyler, special friend Debbie Miller, and special friend Rhonda McMeans all from Las Vegas, Nevada.  She was preceded in death by her father Charles Paterson and her mother JoAnn Smith Paterson.

Kimberly loved genealogy and was a proud longtime member of the Daughters of the American Revolution (DAR), where she served as Nevada State Regent and Honorary Nevada State Regent. One of her proudest accomplishments was being awarded Outstanding Junior during DAR’s national conference in Washington, DC. She also held memberships in various other genealogical organizations including Colonial Dames 17th Century, Sons and Daughters of the Pilgrims, CSKIW, Daughters of the War of 1812, Dames of the Court of Honor, and the William Boone Keith Circle LGAR. Kimberly loved her pets, and even though not very fond of camping, she didn’t mind “glamping” on occasion. Yankee Meadows in Utah held a special place in her heart and she would jump at every opportunity to go camping, or in her case, “glamping” there. She was very social and loved hanging out with her friends. She had a sparkling personality and made friends easily. She leaves behind a host of extended family and friends and will be sorely missed by those who knew her.