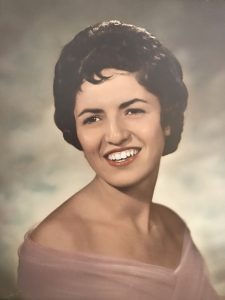 Linda Atwater, age 78, Las Vegas, NV; formerly of Thornton, CO passed away on Sunday, October 17th, 2021.  She was born on July 15, 1943 and is preceded in death by her parents Larry and Evelyn Sullivan; her husband Robert (Bob) Atwater, later husband John Pedote and her sister Debbie.

Linda had 2 passions in her lifetime:  her children and music.  She is survived by her kids: Alan (Kathy) Terry (Denver, CO), Theresa (Rick) Azofeifa (Las Vegas, NV), Aaron (Stacy) Terry (Olive Branch, MS), Adam (Julia) Terry (Las Vegas, NV) and Andrew Terry (Denver, CO).  Linda also had 8 Grandchildren: Tyler, LeAndre’, Malique, Kassandra (Kyle), Kamryn, Owen, Kara and Sophia.  Grandma would also be proud to know her first great-granddaughter, Mila Erin (Kassandra & Kyle Watson) is due in February.  Music brought great joy to Linda throughout her lifetime.  She learned to play the piano at a very young age and her gifts and talents were evident throughout her life.  Nothing brought her greater joy than to share her gift of music with her kids and every other person she came to know.  Later in life, Linda began as a private piano teacher, where she had the opportunity pass on her musical gifts to countless individuals.  Over the years, she taught hundreds of piano students the art of playing the piano and her joy for music was passed on to many children and adults alike.

Besides her children, she is survived by her siblings: Arthur, Bunny and Laurie; nieces, nephews, cousins, friends and a great number of people that were able to experience the gift of music from Linda.  A memorial service will be held at Christ the King Episcopal Church, 6490 Carr Street, Arvada, CO 80004 on November 9, 2021 at 10AM, with a reception of light refreshments to held immediately following the service at a venue to be determined at a later date.  In lieu of flowers, the family is asking for donations to the Lewy Body Dementia Association (LBDA).