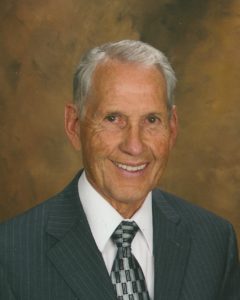 On January 30, 2020, at the age of 84, surrounded by his loving wife, children, and grandchildren, Maurice Stanley Moyle left this earthly world.

Maurice was born on May 5, 1935, in Lone Pine, California. Lone Pine is 150 miles from the mining town of Bodie, California where his parents, Stanley Moyle and Mabel Miller, were living. At the time he had one sibling, Joyce Laverne (deceased) and would be followed by two more, Calvin Durand and Melvin Russell (deceased).

Maurice graduated from Mineral County High School in Hawthorne, Nevada, in 1953. He received his bachelor’s degree from the University of Nevada, Reno, in 1959 in social studies and English. He earned his master’s degree in 1969 in education administration and English from Utah State University.

Maurice was a highly respected educator in his many roles in the public school system. He was a high school English teacher in Cheyenne and Yerington, community college English professor, football coach, and administrator. His administration roles included vice principal, principal, associate superintendent, and curriculum director. His nickname while in Yerington was “The Magnificent One.” After he retired in 1990, he took on temporary roles as principal at Dayton and Eureka and as a strategic planning consultant to several school districts.

In 1974, Maurice was baptized by his son Kevin into the Church of Jesus Christ of Latter-day Saints. He was sealed to Celia in the Salt Lake City Temple in 1981. He served in many capacities including Bishop, Counselor to President Oris Corbridge in the Reno Temple, and as President of the Reno Temple from November 2007 to November 2010. He loved the temple patrons and those with whom he served. His temple marriage and temple service were profoundly transformative. His temple experiences made all the difference. “It changed my life,” he said. His life exemplified his testimony of and his love for the Savior.

Maurice was a life-long athlete. He was a stand-out high school quarterback, forward, and sprinter. He always maintained his physical fitness despite the demands of six children, the increasing responsibilities of his profession, and the commitment to his church. After age 40 he ran five marathons and multiple 5Ks, 10Ks, and half-marathons. He twice completed the week-long ~500-mile Cycle Oregon event. At age 80, he ran his last 5K race at the World Senior Games in St. George, Utah.

Maurice loved the outdoors. The trailer at Webber Lake and the cabin at Panguitch Lake were like second homes. He was an avid fisherman and hunter. Although he delighted at hooking a fish himself, nothing pleased him more than to hear one of his kids or grandkids shout out, “Papa, I caught one!”  He often spent more time baiting hooks, unhooking wriggling fish, untangling fishing line, and freeing snags than he spent with his own line in the water.

Papa loved his dog Buddy, whom he got at a Walmart parking lot in Cedar City. Constantly at his side, Buddy and Papa went for many long runs together in the desert behind their house.  As they both aged, their runs turned into leisurely walks. Papa was heartbroken when Buddy died in 2018.

Perhaps more than anything, Papa loved and took pride in his family. He was married to his sweetheart Celia for 67 years. They were each other’s spiritual support, confidants, care givers, and best friends. Papa took special delight in the little kids. He couldn’t resist affectionately pinching the chubby cheeks of his babies and grandbabies. The grandkids cherished his camping and fishing trips with delicious meals like cowboy breakfast, hot cakes, and Dutch oven chicken. All the kids loved it when he read them storybooks, told corny jokes, and retold stories that made them laugh.

Maurice had a positive impact on literally thousands of lives as an educator, church leader, and patriarch of his family. While he was in the hospital, the constant flow of visitors showering him with love was but one small indicator of the wide circle of people who cherished their relationships him. He was loved by so many. We will miss him dearly.

Funeral services will be held at the Church of Jesus Christ of Latter-day Saints Stake Center, 2955 Rock Boulevard in Sparks Nevada on Saturday, February 8, 2020. A viewing will be at 10:00 am followed by funeral services at 11:00 am. Dedication of the grave and burial will follow on Monday, February 10, at 11:00 am at the Summit City Cemetery in Summit, Utah.