Pamela Branchini passed away surrounded by her family on April 9, 2022. She was born in Helena, Montana on October 20, 1954, the third of three children.

In 1974, Pamela met Dan Branchini, the love of her life. They were married on May 16, 1975 and settled in Las Vegas, Nevada, Pamela managed Readmore books for several years, retiring in 1996. Following her retirement, Pamela spent her days with her grandson who she called her Charlie Brown.” She also became an active member of her church Community Lutheran Church. As the first face you saw at the information desk, she welcomed new and familiar faces with her joyful and kind smile. Pamela was part of the church  “Glitter Team”  decorating the church for each season and holiday, and never failed to include her sparkle and an abundance of glitter. Her joy for life and  kind spirit was contagious to all.

Pamela is preceded in death by her parents, Bob and Helen Dickey, She is survived by her husband Dan Branchini, her daughter Nicole Sartain and her husband James of Las Vegas, her brothers Lynn Dickey and his wite Jeanne of Helena, Boh Dickey and his wife Marilyn of Seattle, and her grandson Boh Sartain.

In lieu of flowers, the family has asked for donations to be made to Community Lutheran Church in Pamela’s name. 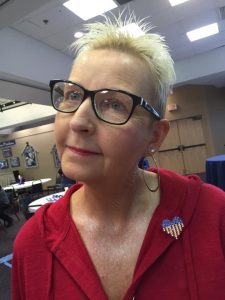