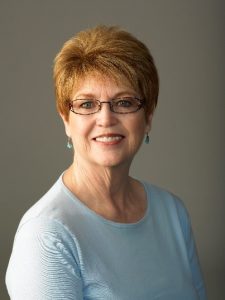 Penny Lynn Sears Wisner passed away peacefully on May 26, 2022, with her loving husband at her side.  Penny was born December 13, 1948, in Richfield, Utah, to George Lincoln and Margaret Page Sears.  She spent her early years on a farm in the Milford flats before moving into town where she attended elementary school through high school.

While attending Milford High School, Penny met the love of her life, Michael Wisner.  They were married on November 13, 1964.  In 1966 they moved to Las Vegas, Nevada, where they raised their four children.

Penny was a hard-working mother of four, working at places, such as First National Bank, Paradise Development, and finally retiring from the Eighth Judicial District Court in 2012 where she was a court clerk and judicial executive assistant for several district court judges.

After retirement, Penny was called to serve as a service missionary for the Church of Jesus Christ of Latter Day Saints at the Las Vegas Bishops’ Storehouse where she served with her husband, Michael, for the last seven years.  Penny made several dear friends in her time at the Storehouse where she touched the lives of many.

Penny was a lifelong member of the Church of Jesus Christ of Latter Day Saints and served in various capacities and callings.  She was an avid pianist, she enjoyed reading, crocheting, knitting, traveling, and spending time with her family and dogs.

Penny battled cancer for 14 years like a warrior.  She beat the odds of survival at every turn.  She was an example of courage, strength, and faith.