Ralph B. Leinen Jr was born in Chicago Heights, IL to Ralph Bernard Leinen and Margaret Mary Horentlein on October 23, 1943.

After Graduating from Bloom High School, He went to work for the US Postal Service. As a Letter Carrier.  He worked in the TriStates office for 38 years, except a 2-year Army stint from 1964-66.   A member of the National Association of Letter Carriers for 60 years.

Ralph Retired in October 1998 and moved to Las Vegas, NV where he married Janet Blume November 1998.

Ralph is preceded in Death by his Parents and a Sister Mary Ellen Brandolino.

His ashes will be interred back in Glenwood, Il at a later date.

In lieu of Flowers the family ask that donations be made to Calvary Chapel SonRise 3500 East Harmon, LV, NV 89121 or to Nathan Adelson Hospice. 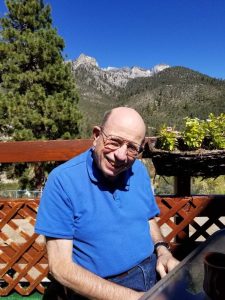