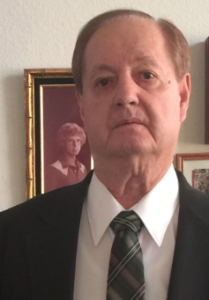 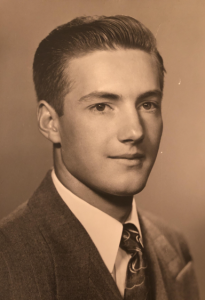 Ralph LeGrande (Hank) Smith, 88, of Las Vegas, Nevada passed away at the Life Care Center of Las Vegas early in the morning on December 6, 2022, from complications related to congestive heart failure. He was born on January 1, 1934, in American Fork, Utah, the fourth of five children born to Adelbert (Dell) and Della Doyle Smith. He is survived by his sister Doris (Loran) Cook. Three brothers preceded him in death, Doyle (Reva), Ron (LouJeanne), and Max (Connie).

He attended American Fork High School where he was king of the basketball court and threw the shot put and discus. After high school, Hank attended Brigham Young University. He subsequently joined the National Guard. He was a Master Sergeant and proudly training to become a Green Beret, a part of the United States Army Special Forces, for deployment during the Korean War. Fortunately, the war ended, and he was not deployed. He subsequently served in the reserve National Guard and worked as a lineman for Utah Power and Light.

Besides his love for basketball, he also loved to bowl. While at the Jack and Jill Bowling Alley in American Fork, Utah he met and subsequently married Gladys Hughes on August 29, 1959. Their marriage was later solemnized in the Salt Lake Temple.

Hank was an active member of the Church of Jesus Christ of Latter-Day Saints. He was a high priest. His favorite position was team-teaching Sunday School classes to the youth of his ward with his wife, Gladys. He also loved serving as an ordinance worker in the Las Vegas, Nevada Temple. His favorite saying was: “Prayer brings miracles.”

He is survived by his beloved wife, Gladys; his three children, Jodi Smith, Wendy (Martin) Ferriter, and Allen (Connie) Smith; his four grandchildren, Jared (Amanda), Jason (Emily), Matthew (Stefanie), and Madison Smith; and one great-grandson, Jesse Michael Smith. He was preceded in death by his youngest son, Michael LeGrande Smith, in 1984.

Hank was a loving husband, father, grandfather. He was loved and respected by all those who knew him. He had a wonderful dry-wit sense of humor that he manifested up to the day before he died.

Funeral services will be held on Saturday, January 7, 2022, at the Church of Jesus Christ of Latter-day Saints on 2285 Tree Line Drive in Las Vegas, NV 89142. Viewing will begin at 10:00 am. Funeral services will begin at 11:00 am. Interment will be in the Davis Memorial Park Cemetery on 6200 S Eastern Avenue in Las Vegas, NV 89119.  For those unable to attend in person, there will be a virtual option on the Stallion Mountain Ward – Las Vegas Nevada East Stake of the Church of Jesus Christ of Latter-day Saints youtube.com site:  https://youtube.com/@stallionmountainward6945