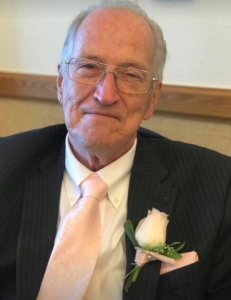 Richard Elwood Cleveland’s heavenly light joined with its mortal body December 6, 1939, beginning what would be a fulfilled life of happiness and love. The Salt Lake County Hospital was given the honor of welcoming his soul into this world, joining the family of Leola Lillian Pugmire and Elwood Jerry Cleveland. After spending most of his youth in southern Idaho, when Richard’s father passed away, the family moved to an apartment on Almond Street, just west of the Capitol Building in Salt Lake City, Utah.

He attended West High School and shortly after graduation would embark on his own mission for the Church of Jesus Christ of Latter Saints.  From 1960-1962, the Spanish-American Mission (encompassing Texas, Oklahoma and New Mexico) would fill his life with true purpose.  He loved the Latino people, felt true admiration and privilege in learning the culture and language of the many he brought into the fold.

Shortly after his mission Richard would date and marry the love of his life, Marilyn Cushing. They would be sealed for time and all eternity in the Logan Temple on April 12, 1963. They began their family in 1964 and would have six beautiful children by 1974. Together with his eternal companion, they would reside in SLC, Sandy, South Jordan, Utah and Reno, NV over their 59 years of marriage.

After serving as a clerk in the Army Reserve, Richard began his career in the transportation industry at IML trucking and later with Consolidated Freight and Burlington Northern.  After giving 20 years of his professional life to the transportation industry, he embarked as a salesperson for Interstate Brick.  He went onto start his own flooring business, as well as dabbling in Real Estate. He completed his career as a salesperson at RC Willey.  Richard was an avid golfer, loved the Utah Jazz and bled BYU Cougar blue.  He also volunteered countless hours in the community, one of note, for South Jordan Little League baseball, he was instrumental in building the little league field on Skye Drive near his home.

He loved his membership in the Church of Jesus Christ of Latter-Day-Saints (LDS) and represented the LDS faith in many capacities, including the bishopric of his ward. Serving and uplifting those in his community, he felt most valuable in the support of our Savior. He also treasured actively seeking his ancestry through hours of genealogical research and documentation.

In the final decade of his life, God saw fit to start gathering his memories in preparation for the eternal journey he would eventually take. After being diagnosed with Vascular Dementia in 2010, progressing to degenerative Alzheimer’s, he was met by the familiar embrace of the Savior he so loved, on October 14, 2022. He is survived by his loving wife Marilyn Cushing Cleveland, his sisters: Geraldine Hulme, Faye Gailey, brothers: Cloyd Cleveland, Paul Taylor, Charles Taylor, and children Richard (Shelley), Michael, Aimee (Blaine), Ryan (Janell), Laura (Todd), and daughter in law Laura Giometta Cleveland. He was preceded in death by his son Nathan Blake Cleveland and siblings Gary Cleveland and JoAnn Denning.  He was blessed with 19 grandchildren and five great grandchildren.  He was so loved by all of us in this life and left behind a legacy of the knowledge that he will continue spreading that bright light of love.

Funeral services will be held 11:00 AM, Tuesday October 25, 2022, at the Glenmoor 2nd Ward building, 9455 South 4800 West, South Jordan, Utah, followed by internment at Wasatch Lawn Memorial Park South Valley Cemetery, 13001 South 3600 West, Riverton, Utah. In lieu flowers we request a donation in his name to the Alzheimer’s Association (https://www.alz.org/) or a local charity.