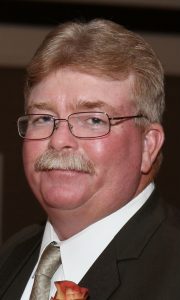 Ronald Gene Marx, of Las Vegas, Nevada, passed away at home surrounded by loved ones on September 23, 2021, after a three-year battle with cancer. He was 59 years old.

Ron was born on January 6, 1962, in Glendora, California to Leon and Nyda Dell Marx. His penchant for adventures began at a young age as the seventh of eight wonderfully mischievous children. He graduated from Azusa High School in June of 1980.  On July 21, 1980, he married his high school sweetheart Kimberly Mitchell in Azusa, California. In 1981 they were sealed for time and all eternity in the St. George LDS Temple.  They are the proud parents of five children and fifteen grandchildren.

His family was his priority.  He supported children and grandchildren in school and sports activities, often coming in his work clothes—dirt and all.  He was extremely proud of his children and loved to brag that they each earned college degrees.  He loved to take his grandchildren on fast rides through the desert and trips to Lake Powell every summer.  He felt life was best enjoyed with a lot of horsepower and hydraulics.

Ron worked in the fire protection business until he founded Xram Excavation in 1995. For twenty-six years he led Xram Excavation, installing underground utilities for hundreds of commercial projects throughout the Las Vegas Valley. The business was a financial success, but more importantly, each of his sons learned hard work and life lessons while working long days with him on construction sites.

He was a faithful member of the Church of Jesus Christ of Latter-day Saints. While he served in many capacities his heart was with the youth. His sense of humor and infectious attitude allowed him to be a role model and mentor to hundreds of young people.  He was generous with his time and resources, especially eager to help others prepare for missions and higher education.

The Marx Family would like to extend our sincerest thanks to Dr. Gershman and the nurses and staff of Optum Cancer Care as well as Southwest Medical Hospice for their dedicated and loving care.