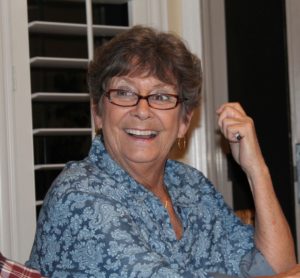 Sharon J. Little passed away peacefully on October 3, 2019 practically smothered in love and affection by those who made her life shine so brightly.

The fierce matron of her large rambunctious family, she lovingly guided her sisters and brother, children, grandchildren, husband, close friends, and wide extended family through life. Always laughing, always loving, she made everyone feel like they were the most important person in the world. Holding court at her kitchen table for hours on end she listened, dispensed advice and solved your [and the world’s] problems. A therapist, confidante and partner-in-crime, she always knew what was best for you and what was wrong with them. Once life was squared away out came the cards and a bottle of rosé. Her husband Huck across from her at the table and the news always on in the background, visitors were always welcome. She looked forward most to seeing her kids and grandkids, the lights of her life.

Born in 1944 in East St. Louis Illinois to Margaret and Louis Sanboeuf, the oldest of five, she grew up in 10 states across the country as her father’s career progressed in the meat industry, making friends and helping raise her siblings along the way. Graduating from Marquette University in 1966, she married Edward Printy and they lived in Independence, IA becoming involved with the family business. She ultimately settled in Phoenix, AZ where her sons Michael and Patrick were raised. In 1988 she moved with her future second husband Donald “Huck” Little to Las Vegas where she worked for Del Webb before retiring in 2002.

Never one to sit still, she and Huck embarked on a series of adventures involving motorhomes, boats, and cross-country adventures. For a number of years they reconnected to the family and community in Iowa and purchased a little red cottage on the Wapsipinicon River that had long been in the family. The screened porch of the cottage seasonally replacing the kitchen table in Vegas, family and friends would gather every night for cards, dinner, and near-constant laughter. Finally settling on King Mesa Drive in Henderson, Shari was welcomed into a group of local women known as the BFFs, dear friends she treasured for the rest of her life.