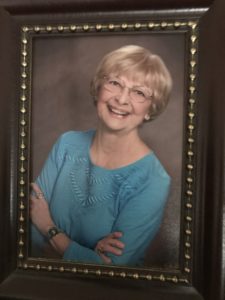 Sonia Wallburger Jerome Revitt died at home surrounded by her family on October13, 2019 7:40pm at the age of 87.  She was born in New York City on February 25, 1932 and spent her early years in Queens, New York. In 1945, the family drove across the country and settled in San Bernardino, California. Sonia married Adrian E. Jerome in June 1951 and they raised four children. The family moved to Concord, California in 1962 and Sonia held several part-time secretarial jobs while the children were at school. In May, 1988 she married John E. Revitt, retired, and moved to Shady Cove, Oregon.  She and John enjoyed retirement traveling overseas and in the US. Golfing and fishing were also a big part of their lives.

Sonia moved to Sparks in 2010 to be closer to family and take part in the many camping and family gatherings. She travelled with friends and family to Turkey, Italy, China, Ireland, Jamaica, cruised the Atlantic, Pacific, and Caribbean oceans and was active in her quilt, knitting, and writing groups.

Over the years Sonia’s faith was her anchor.  She took part in various bible studies, attended numerous churches in her lifetime and was currently a member of Sparks Christian Fellowship and bible study.

Sonia’s ashes will be laid to rest next to her husband John on October 21, 2019 10:00am in Eagle Point National Cemetery, Eagle Point, Oregon.  Memorial services are scheduled for November 11, 2019 2:00pm at Sparks Christian Fellowship 510 Greenbrae Drive, Sparks NV 89431.

Memorial contributions may be sent to International Essential Tremor Foundation for research – www.essentialtremor.org.