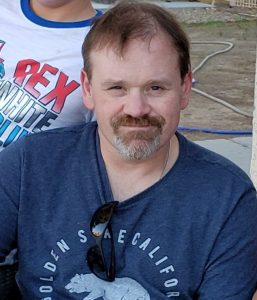 Stephen “Steve” Douris was taken from us on Saturday February 29, 2020, at the age of 45.
Steve was born in Alberta, Canada on May 9, 1974 to parents Earl and Debra Douris. He moved with his family to the United States as a teenager. He had lived in several different areas before settling down in Henderson, NV. Steve had a longtime passion for cooking and made this his career. He graduated from Le Cordon Bleu in 2012 and worked at various fine dining restaurants along the Las Vegas strip. He had dreamed of opening his own family run restaurant and was studying for a business degree prior to his passing.
He is survived by his wife, Tinka, and their three children, Stephen, Iolite and Chloe, of Las Vegas, NV; his parents, Earl & Debra Douris, and sister, Tara Douris, of Henderson, NV; Maternal grandmother, May McAndrew, and many beloved aunts, uncles & cousins, from Alberta, Canada.
Steve enjoyed spending time with his family, fine dining, rockhounding, creating jewelry pieces and luxury cars.
Steve was an intelligent, kind hearted man, who long suffered from mental illness. Through his struggles he always loved his family dearly. He will be missed by all who knew him.