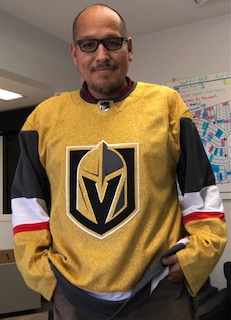 Steve Ross Martinez (Na Ko Stas, Little Bear) departed this life on March 4, 2021. Steve was born on October 15, 1976 to Jesse Martinez & Diane White. Despite complications at birth, he came into this life a fighter and maintained his strong will throughout life.

Steve attended Colstrip High School where he graduated in 1995. He participated in basketball, football, and track. He excelled at sports and academics.

Steve would say he met the love of his life in 1989. Steve and Becky got married on July 1, 2000. They had two boys, Kane Jordan and Kale Jesse. Steve was very proud of his family. He loved being a father and a husband above all else.

Steve moved to Las Vegas in 2002. He quickly grew to love his new home. He had a passion for his family, his friends, his dogs, VGK, photography, reptiles and toy collecting. On January 13, 2018 he went to his first Vegas Golden Knights game at T-Mobile Arena with Jen Hiipakka. From that moment on he was an avid VGK fan. You would never see him without something on that said VGK. He loved to “Knight it Up!”

Steve is a descendant of Chief Two Moons, Chief Red Robe and John Seminole. Families include, Seminole, Red Robe, White, Spear, King, Castro, Glenmore, Spotted Elk, Whitedirt, Killsknight, Red Hat, Foote, Sioux, Shoulderblade, Compher. We are a large family please forgive us if we left anyone out, it is not intentional.