Born in Kingston, Surry UK 11/13/1935, he and his brother, Tony, the sons of Charles and Gwendolyn, were orphaned at an early age and grew up in several children’s homes in the UK.

At age 15 he entered the British, Royal Navy as a “boy seaman” first serving on Aircraft Carriers and  Battle Ships before settling as a submariner and rising to the rank of Petty Officer. He served his country in the Korean War  and shortly after marrying his first wife, Rosemary in 1956, his submarine was deployed to the Suez Canal during the Suez Crisis. Upon leaving the navy he spent time as a “Special” (volunteer) with the Thames River Police before emigrating to the United States in 1972.

After several different sales positions in the United States, he finally settled back in law enforcement, his true calling, working with the UNLV police department until retirement in the late 90’s.

He spent a long happy retirement living between the USA and the Philippines with his girls. 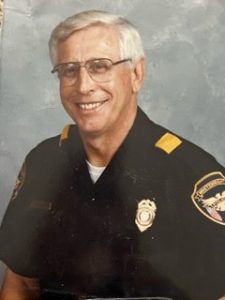