Terry L. Taylor, a retired school teacher, passed away peacefully on February 2, 2022 in Las Vegas, Nevada at the age of 86.

Terry attended elementary and high school in Pima graduating in 1953.  He was active in the school band, football, basketball, and track, lettering in all four.

Terry attended Eastern Arizona Junior College in Thatcher, Arizona graduating in 1953.  He also pursued a Bachelors of Art degree and Masters at Arizona State University which he received in 1969 and 70 respectively.

Terry served his country in the U.S. Army from 1955-1957.  He then returned home to Pima and married the love of his life and the girl who waited for him, Maxine Wignall of Safford at the Mesa, Arizona Temple October 1, 1957.

Terry was a lifelong member of the Church of Jesus Christ of Latter-Day Saints.  He served in many callings including:  Ward Clerk, Executive Secretary, Elders Quorum President, High Counselor, Bishop’s Counselor, Scoutmaster, Explorer leader, and Temple Ordinance Worker, and Branch President.  One of his most memorable callings was Branch President of the Single Tree Ward. He formed many personal relationships and lifelong bonds with many of the young adults.  He was a mentor to many and a friend to all.

Terry also served in several leadership positions in the Boulder Dam Area Council of the Boy Scouts of America.  In 1987 the Council honored him by awarding him the Silver Beaver Award.  He also coached city league youth soccer for many years.

One of his lifelong passions was fishing.  He purchased his dream place in Beaver, Utah where he taught family members about this hobby with an excitement one would have to see to believe.  Terry is known among his family as a master story- teller and was always willing to share a tale.

Terry was preceded in death by his parents, William and Lucille Taylor, an older brother Ruel W. Taylor, a son, Timothy Wayne Taylor, and a daughter, Sheila Wooten.

He is survived by his wife of 64 years, Maxine, daughters Pam, and Marci, and sons Terry Joe and Maxwell, a sister, Trella, 13 grandchildren and 22 great grandchildren. 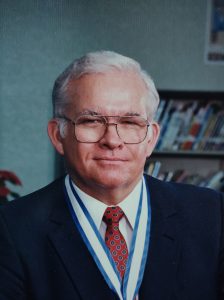