Born in Louisville, Kentucky in 1937, his family relocated to Hamilton, Ohio early on.  He played football in high school for the Hamilton Big Blue, and then went on to Ohio State University, where he was a member of the Phi Gamma Delta fraternity, played for legendary coach Woody Hayes on the 1957 National Championship football team, and was on the winning Rose Bowl squad in 1958.  He was a proud member of the Varsity O Club all his life, as well as a die hard Buckeye fan always. Graduating from OSU in 1959, Tom was in the Air Force Reserve for a brief time, and then went on to work for many large companies as a sales representative, including Wyeth Labs, 3M and Grumman.

Tom, his wife and family settled in Seabrook, Texas in 1976, where he would spend most of his life, and in retirement, bought and managed his favorite neighborhood bar in the Clear Lake, Texas area for nearly ten years.

Tom had a lifelong love of travel, and loved to take his family on camping vacations to the shore or the mountains, and spent many happy days driving around the country in his van with his dogs later in life, always heading for the mountains and cool weather.

No services are planned and a private burial service will be held at a later date, where he will join his beloved wife, Judy, in Clyde, Ohio. 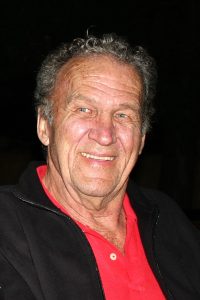