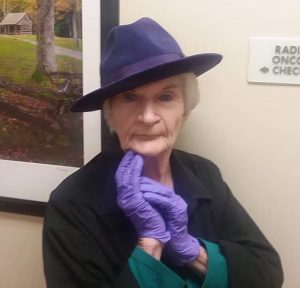 Ursula Arvilla Richardson lovingly known by family and friends as “Sallie” was born in Pocatello Idaho on November 29th, 1936, To John Clyde Richardson and Ursula Arvilla Rupp. Spending her formative years at the Randolph Street home. She enjoyed LDS church mutual, high school softball, and sock hops graduating from Pocatello High in 1953. Sallie worked for Union Pacific Railroad at the age of 17 in the telegraph department and on July 3rd, 1956, married Bud Manwill while he was on Military leave. Their first child Cameo arrived in (April 1957) while Bud was still serving in the Navy then Tonya (January 1959) then Buddy Shawn (July 1960) all of whom were born in Pocatello.

The Family eventually moved to Las Vegas in the late fall of 1960 with the prompting from family already living there. Bud was hired by Clark County Fire Department June 6th, 1961. Bud and Sallie set up their first home off Cinder Lane which is now Twain and Dean Martin, Todd (September 1961) was born while the family resided here. In 1963 Bud bought an Airforce barracks from McCarran Airfield and moved it to Merrill Street in East Vegas, Victor would join them in (May 1965) the house and five kids would be their project until the late 1980s.

Sallie a stay-at-home mom until 1972 went to work for the Clark County School District as bus driver until 1975 eventually returning full time to the house and family shop.

The home that she and Bud kept at Merrill would have many fire department family members contributing to its construction and enjoying numerous holiday parties that would be held throughout the years.

In the mid to late 1980s Bud and Sally would purchase a summer home in Oakley Idaho. Eventually divorcing this would be Sallie’s permanent home for the next 10 years. She would live her dream to travel   across the States with her buddy Rafael spending time in Florida and also Ohio with her best friend Joe fishing and camping the great lakes.  She would eventually return to the Las Vegas area in the late 1990s working parttime gigs, spending lots of time with her children, grandchildren, and great-grandchildren, attending birthday parties, holiday celebrations, graduations, and many family functions.

She loved fishing and camping, dancing, bingo, and bowling.

She was preceded in death by her brothers, Gary and George Richardson and her son Victor (Christie) Manwill. She is survived by her children Cameo Arrington, Tonya Auzenne, Buddy (Cathy) Manwill, Todd Manwill, her brother Forest Richardson, and sisters Cynthia (Garth) Greenwell and Vicky (Mike) Reynolds, as well as 14 grandchildren and 10 great grandchildren.

Her proudest and most cherished achievement was her family. She loved to dance (Arthur Murry professional dance instructor), and had the softest eyes, with the wildest free spirit. You were and still are the life of the party Mom!!

Love possesses not nor would it be possessed.

For love is sufficient unto love.

When you love you should not say, “God is in my heart,” but rather, “I am in the heart of God.”

And think not you can direct the course of love, for love, if it finds you worthy, directs your course.

Love has no other desire but to fulfil itself.

But if you love and must needs have desires, let these be your desires:

To melt and be like a running brook that sings its melody to the night.

To know the pain of too much tenderness.

To be wounded by your own understanding of love;

And to bleed willingly and joyfully.

To wake at dawn with a winged heart and give thanks for another day of loving;

To rest at the noon hour and meditate love’s ecstasy;

To return home at eventide with gratitude;

And then to sleep with a prayer for the beloved in your heart and a song of praise upon your lips.