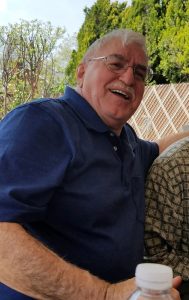 Vincent “Vinny” Giacomo Caro, 72, of Henderson, NV, passed peacefully March 16, 2020, surrounded by loved ones at St. Rose Dominican Hospital in Henderson, NV. Vincent was born in Montallegro, Sicily, Italy, on August 26, 1947. He is the son of the late Stefano and Giacoma (Russo) Caro.

Vinny was happiest when working in his garden while listening to Italian music. He loved to cook and leave the mess for everyone else to clean up. He had a passion for aeronautics and obtained a private pilot single engine aircraft license. He enjoyed making people laugh, always had a smile on his face, and had an infectious personality that everyone loved. He was generous to those he cared about and had a lasting impact on many lives. Vinny will be greatly missed.

A private service for family will be held in Henderson, NV. He will be laid to rest at the Southern Nevada Veterans Memorial Cemetery in Boulder City, NV. A Celebration of Life will be announced in the future.