William (Bill) Ray Jolly was born on September 6, 1938 in Union, South Carolina to Wallace and Olive Jolly. He passed away peacefully on July 15, 2022 in Las Vegas Nevada.

Bill had a lifelong interest in aviation and began his 21-year career in the United States Navy in 1958. He served as an aviation structural mechanic on numerous aircraft through 1979, stationed on the USS Yorktown, USS Midway, USS Nimitz and USS Forrestal. He proudly achieved the rank of Chief Petty Officer, and made many friends throughout his time in the Navy.

Following his Navy career, Bill used his vast aircraft knowledge and expertise to continue another career with Northrup Grumman, where he worked as an instructor until he retired in 1999.

In May 1969 he married Vonnie and they were married for 43 years. They bought their first house in San Diego shortly after they married and lived there until 2000 when they moved to Las Vegas to begin a new adventure. Together they travelled the world to such places as Alaska, Europe, Japan and Southeast Asia.

Bill is survived by his daughter Debbie (Mike) Raftery and grandson, Keaton, of San Diego, his granddaughter, Kelly Modena of Tennessee, and his extended family members Zaretta Keopka of Oregon, and Joni (Allen) of Oxnard. He is preceded in death by his wife, Yvonne (Vonnie).

Services to be held at Fort Rosecrans National Cemetery in San Diego on Friday, October 7, 2022. 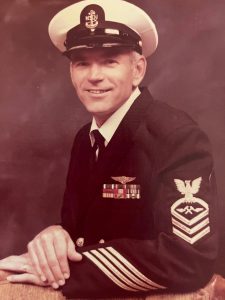