It is with a broken heart that I announce the passing of my father William Robert “Bob” Millard. A loving and dedicated husband, father and grandfather, born May 26, 1938 he passed away peacefully in his home April 9, 2022.  He is preceded in death by his loving wife Brenda, his parents William and Drusilla Millard, and sisters Carol and Anita.

He is survived by his adoring daughter Michelle Patti, her husband Todd, who loved him as a father, two grandchildren, Alyssa Lyn and Robert Michael and numerous  friends and family.

Bob was a native of Louisville, Kentucky. When he was a child, his maternal grandmother moved into the family home bringing with her an old upright piano. Thus began an instant love affair and he taught himself how to play at age four. During high school, the band director recognized his natural talent and taught him music theory, composition and how to read guitar symbols on sheet music. By age 14 Bob was playing professionally and had joined the Musicians Union. He was voted Most Talented at Southern High School and was a natural entertainer.

He served in the U.S. Army at Fort Knox, KY and was in the 113th Army Band. He met and married the love of his life, Brenda in 1962 and spent 50 years loving her and being a dedicated husband and father.

Early in his career Bob sang and played piano at Louisville’s finest supper clubs and lounges and was a regular on The Morning Show on WAVE-TV, the NBC affiliate station. When Oscar-winning songwriter Sammy Cahn guested on the The Morning Show, Bob played him on with “All the Way” and started a friendship that lasted until Cahn’s passing. They co-wrote the song “One Time,” and Sammy was instrumental in Bob’s and Brenda’s decision to relocate to Los Angeles in 1976.

Once Bob was settled in California, Sammy arranged a meeting with the owner of famed restaurant Gatsby’s, and he began performing there. On his first night, Bob recalls looking out to his audience and seeing George Burns, Betty White with her husband Allen Ludden, and Tony Martin with wife Cyd Charisse. During his time there he amassed fans and friendships in many celebrities including Bert Convy, Lucille Ball, Danny and Rosemarie Thomas, Dean Martin, Phyllis Diller, and countless others. He was a lifelong supporter of St. Jude’s Children’s Hospital and graciously performed on their telethons.

Bob also performed at the iconic Jimmy’s Restaurant in Beverly Hills. He stayed there for many years in addition to appearing at other local hot spots such as Cafe Swiss, and Hotel Bel Air. Many more celebrities became friends and fans, and it would not be unusual to see Bob singing a duet with the likes of Carol Burnett, Debbie Reynolds, or Merv Griffin. Bob was the quintessential Entertainer’s Entertainer and he was loved and cherished by many.

In 1995, a change of scenery was in order. Bob and his beautiful wife Brenda made the move to Las Vegas where he began performing at the local celebrity hangout Piero’s.

After Piero’s, Bob appeared at Ferraro’s, a local Italian restaurant.  One night, the entertainment director of MGM GRAND, Richard Sturm, asked if he would be interested in opening the Brown Derby restaurant. There he began a two-year run for his old friend Kirk Kerkorian. While there, he became friends with Tom Jones, who came in every night to see Bob play after his show at the Hollywood Theatre. Bob also had a four-year run at Onda Lounge at the Mirage and he later worked at Golden Steer and Waverly’s Steakhouse.

Bob played for various private and exclusive events around Las Vegas and never wanted to retire. After Brenda’s passing in 2011 he spent more time with his daughter’s family in Dallas, TX and made wonderful family memories.

Bob’s joy was found in bringing happiness to others through life and song. He was a masterful storyteller and brilliantly hilarious. Music was his gift and he gave of it freely and beautifully. He is deeply missed and immensely loved. We know Bob is reunited with his loved ones in Heaven, and singing with the Angels with a glass of his favorite Merlot. We also know that he will finally master the Sunday NYT crossword puzzle! Bob will forever live on in our hearts and memories.

We will honor Bob with a Celebration of Life, details forthcoming. Please feel free to share any special memories you have of Bob and how he touched your life. 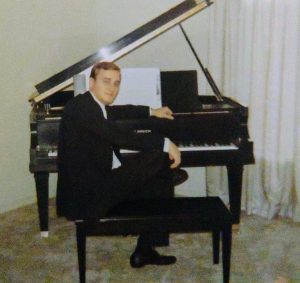 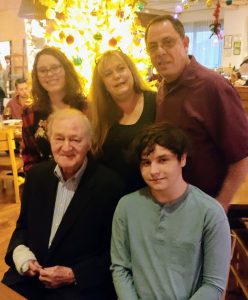